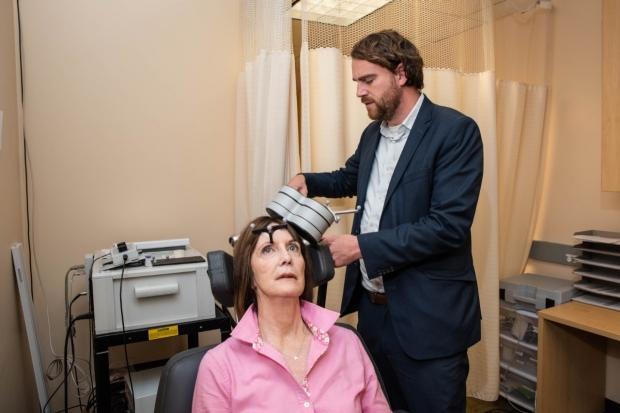 A sample of 21 participants experiencing severe depression and was unresponsive to anti-depressant medications, talk therapy, or other forms of electromagnetic stimulation such as ECT, was recruited in a small study designed by Stanford Professors. The researchers used a form of Transcranial Magnetic Stimulation, or TMS, called intermittent theta burst stimulation (iTBS) to treat the participants with depression. This stimulation mimics the brain's natural firing patterns during memory processing. TMS is an FDA approved, noninvasive, and safe therapy for treatment resistant depression. Upon completion of this study, they concluded that TMS rapidly relieved symptoms of severe depression in 90% of participants. This was quantified by a score of less than 11 on the Montgomery-Asberg Depression Rating Scale. The researchers are conducting a larger, double-blinded trial in hopes that the second trial will prove to be similarly effective.

According to Nolan Williams, MD, assistant professor of psychiatry and behavioral sciences and senior author of this study, he mentioned that, "There has never been a therapy for treatment resistant depression that's broken 55% remission rates in open-label testing." He also added that electroconvulsive therapy (ECT) was thought to be the gold standard, but it only has an average of a 48% remission rate in treatment resistant depression. However, ECT has a list of side effects and is more invasive when compared to TMS. So a 90% remission rate for treatment resistant depression is huge in the field of psychiatry. One patient undergoing the study even quoted, "I used to cry over the slightest thing,” she said. “But when bad things happen now, I’m just resilient and stable. I’m in a much more peaceful state of mind, able to enjoy the positive things in life with the energy to get things done.”

If you think you can benefit from the TMS treatment, give us a call at (714) 867-7037 for more information and to schedule an appointment. TMS is covered by most insurances and is FDA approved to treat depression for adults over the age of 18 years old.